A History of Oregon Tool, Inc. through the 1980s

If you’ve been with us from the beginning, tracing the history of Oregon Tool, Inc., you’ve probably started to notice a pattern. Like links on a chain, each new product builds on its predecessor while leading the way to the next innovation. The 1980s promised to make our chain stronger than ever.

THE BRANDS THE PROFESSIONALS SWEAR BY

The Woods® brand had almost 20 different patents by the start of the decade. New patents of the ‘80s included a hydraulic grapple, a loader quick attach system, a 3-point hitch finishing mower, and a 3-point mounted trencher. In 1983, the Woods® brand shipped its first rear-mounted backhoe. The following year, the F35 undermount mower was introduced at the Lawn and Garden Show in Louisville, Kentucky.

Meanwhile, the engineers behind the Oregon® brand turned their attention back to timber harvesting. In 1982, the Oregon® brand launched the Super Guard 72LG, a safer, high-performance, full-chisel chain that featured ramp-shaped depth gauges and a top-plate witness mark for easier, more accurate sharpening. The following year brought the Power Match® guide bar. Boasting a single-rivet, replaceable nose, it quickly became one of the company’s most popular professional-grade products.

New products also included the LubriJet, a longer-wearing guide bar; the Super 70 Series chisel chain, which cut 30% faster than the competition; the stronger and safer Double Guard® bar, intended for light users; and a variety of bar and chain for mechanical timber harvesting, a thriving new market across Europe and North America. A 1989 survey in Chain Saw Age magazine (now known as Power Equipment Trade) ranked the Oregon® brand #1 in the saw chain product category, followed by Stihl and Husqvarna. 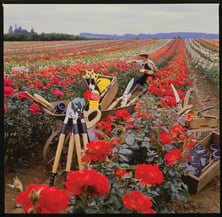 Though the Oregon® brand had returned to its roots and revitalized its pro-grade offerings, that didn’t stop it from growing new branches. In 1986, repackaged under the name Yardvark™, Oregon® outdoor care products expanded to include trimmer line, trimmer blades, and trimmer heads, as well as D-handle pruning saws, folding saws, and safety accessories. This opened the door to an even wider market of professional users. In 1981, Omark Industries hit a sales record of $280 million. As always, the Oregon® brand was a major contributor to its parent company’s success. Given the quality of their product line, the Oregon® marketing team knew they had the goods to back up the hype — literally. They began the decade by placing their one-stop Firewood Centers in thousands of retail stores around the country, capitalizing on consumer demand for saw chain in spite of a recession. And their efforts paid off; by 1984, across every major market, business increased by 17%. 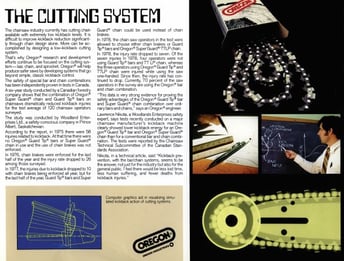 In 1988, the Oregon® brand hit a sales record of its own, up 12% from the previous year. That same year, the brand received a Gold Award from Hatton-Brown, Inc. for Outstanding Advertiser in the Forest-Products Industry. Awards were judged based on graphic design, copy, creativity, and overall appeal. The Oregon® marketing team — working in-house — took the first-place honor for Best Four-Color Spread, competing against big-name advertising agencies hired by the other brands. A letter from the publisher read:

We should point out that the competition in your classification was fierce. Your advertising beat Caterpillar, John Deere, J. I. Case, Kenworth, Goodyear, and many others.

THE FUTURE OF MANUFACTURING 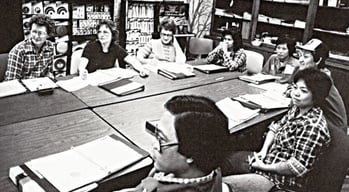 Over the next few years, Omark implemented these techniques company-wide, which led to an increase in productivity and quality across the board. It created a better work environment for employees and more value for customers. Success stories were written about by several major business publications, which led to invitations for Omark employees to be keynote speakers for dozens of professional and civic organizations.

The company’s reputation as a leading U.S. manufacturer only grew, and this led to the 1985 acquisition of Omark Industries by Blount, Inc., a diversified manufacturing and distribution conglomerate based out of Montgomery, Alabama. 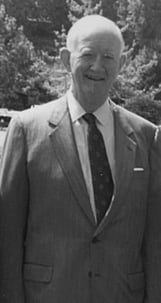 With Omark under its wing, Blount, Inc. was now on a whole new trajectory, buoyed by a number of thriving, new businesses, including the world’s #1 producer of saw chain, the Oregon® brand. Omark would add over $300 million in sales, an impressive sum that would push Blount, Inc. over the billion-dollar mark.

The basic philosophy of Blount and Omark are remarkably similar. Both are people-oriented companies and get things done in much the same way.

MORE THAN THE SUM OF OUR PARTS

So far in this chapter of Oregon Tool, Inc. history, we’ve covered major successes on a number of fronts. We’ve shown how the efforts of our team members translated into record sales, prestigious awards, public praise, and brand equity. But some successes are harder to quantify. 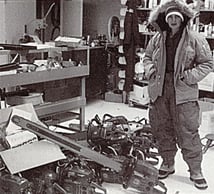 In October of 1988, three California gray whales found themselves trapped under the Arctic ice near Utqiagvik, Alaska. LaVeta Hibbs, an Oregon® employee, learned that members of the local indigenous community were using chainsaws to cut breathing holes in the ice, attempting to lead the whales to an open sea channel. She contacted Jim Osterman, then-President of Oregon® Saw Chain Division, and asked if they could help out. That call prompted the donation of saw chain, guide bars, and powerheads, as well as a trip to Alaska by LaVeta and one of her colleagues to provide the rescue team with technical and logistical support.

Whether it’s Joe Cox and the Oregon Saw Chain Corporation, John Gray and Omark Industries, or Red Blount and Blount, Inc., over the decades, some things have remained a constant: the power of Oregon® branded products and the ingenuity and passion of the people who make and use them every day. Oregon Tool, Inc. is the embodiment of the Oregon® brand’s legacy, keeping that legacy alive, along with the legacies of the Woods® brand and, as we shall see in our next chapter, the ICS® brand as well.