A LEGACY OF INNOVATION

When looking back on Oregon’s 75-year history, one thing that stands out is how our company’s timeline is punctuated by a progressive series of innovative, new products that changed the way people work, both professionals and nonprofessionals alike. 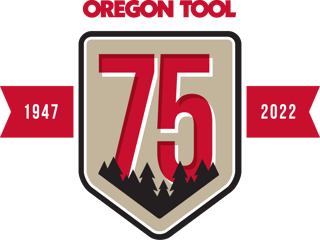 The company’s first product alone was based on an ingenious idea that would solve one of the logging industry’s biggest problems, a problem that all industries face: How do we do this faster, better, and more efficiently? You can see the inflection points, every few years a new innovation, a new product that would take an existing design and improve upon it, in such a way that the old way of doing things would soon become relic of the past.

In celebration of our 75th anniversary, what follows is an overview of five of Oregon’s most successful and enduring products, what they are and how they work, and the impact they’ve had on the lives of the people who use them.

THE BASIS OF THE MODERN SAW CHAIN

The year is 1947, and the logging industry has a problem: chainsaws, though great in theory, don’t work any more efficiently than a traditional two-man crosscut. In post-war America, you couldn’t build houses fast enough, and to do that, among other materials, you needed a lot of timber.

Now here comes a guy named Joe Cox, a logger living in Portland, and he knows the industry needed a push towards mechanization. So he starts this company, the Oregon Saw Chain Corporation, with only one product and four people on the payroll—working out of his basement. The product is a new type of saw chain that could make any chainsaw cut with lightning speed.

How did he do it? Well, one day while chopping wood with a simple ax, Joe noticed the larvae of a timber beetle burrowing through an old, rotted stump. He noticed the way the creatures’ mandibles would cut the wood, not just back and forth like a handsaw, but side to side as well.

In those days, chainsaws were still trying to mimic the action of a handsaw: back and forth, back and forth… Only with more power. But power isn’t enough. Precision is also needed.

So Joe devised a hooded chain that, rather than mimic that of a handsaw, would mimic the cutting action of the timber beetle, almost exactly. They called it the Cox Chipper Chain, and not only did it cut faster and much better than its predecessor, it didn’t need to be sharpened as often.

This saved countless hours of a sawyer’s time and totally revolutionized the logging industry. Within five or six years, the old scratcher chains sawyers used to use were almost completely taken off the market.

A SHARPER CHAIN IN FIVE SECONDS

By 1963, Oregon was well on its way to becoming a leader in the industry. Joe Cox’s saw chain was now being used all around the world. More and more people, both professionals and everyday folks, were using chainsaws in their daily lives. And while the chipper chain didn’t need to be sharpened as often, it still needed to be sharpened. And this took time. A sawyer would have to either sharpen a chain by hand, with a file, or take the chain to a dealer and have it sharpened professionally. Short of that, you’d throw the chain in the garbage and buy a new one. Having a sharp chain makes the job more enjoyable, more efficient.

And so in the spirit of Joe Cox, the creative minds behind Oregon took note of the problem and soon came up with a solution.

The PowerSharp self-sharpening system includes a portable, bar-mounted sharpener integrated directly into the saw. It automates the sharpening process, providing a sharp chain for any user, any time they need it. With the touch of a button, a saw chain can be sharpened in three to five seconds. No need to file. No need to fuss. It’s that simple. 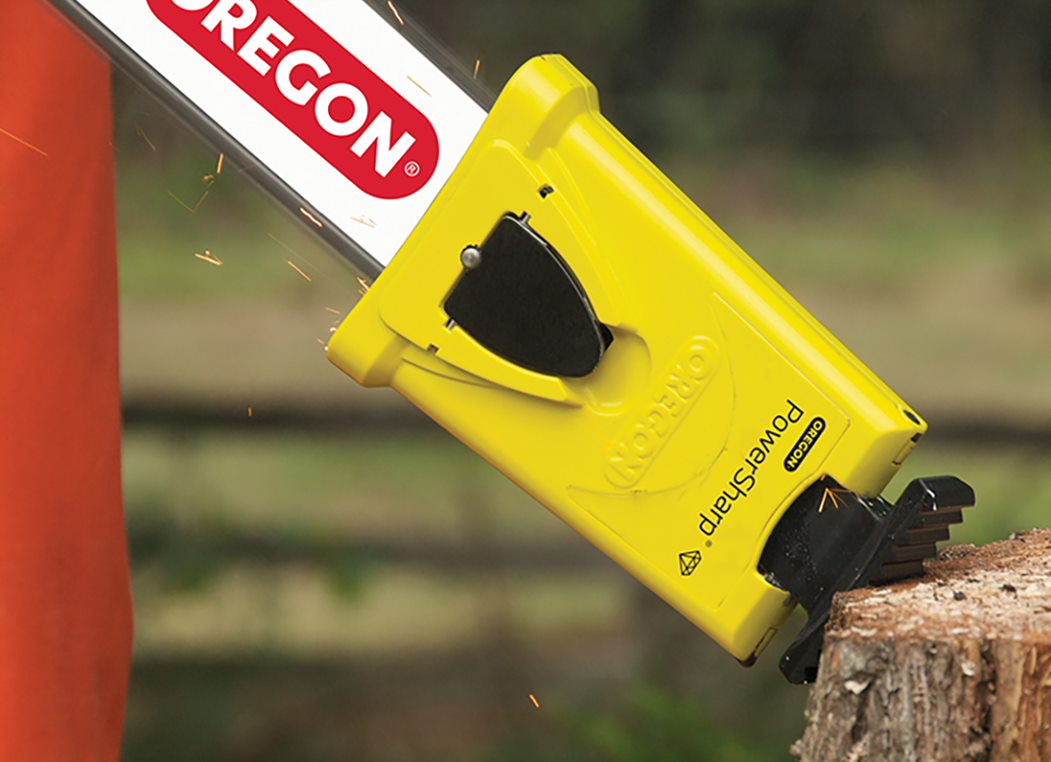 Compatible with select chainsaws, the PowerSharp uses a proprietary Oregon saw chain and guide bar made exclusively for the system. It provides consistent results and more efficient cutting, as the chain is top-sharpened, unlike other models. The bar-mounted sharpener comes with a sharpening stone allowing for three points of contact, giving the chain a stable and consistent grind every time it’s used. Over the years, the system has been enhanced with superior chrome placement on the chain cutters, to keep them sharper even longer, as well as a diamond dresser link that resurfaces the stone. The best part is that the system allows a chain to maintain the same level of performance throughout its lifespan, with no degradation.

The Oregon CS1500 is a corded electric chainsaw that comes with a PowerSharp system already built in. It’s currently the #1 corded chainsaw on Amazon and was named the best corded chainsaw by Consumer Reports. 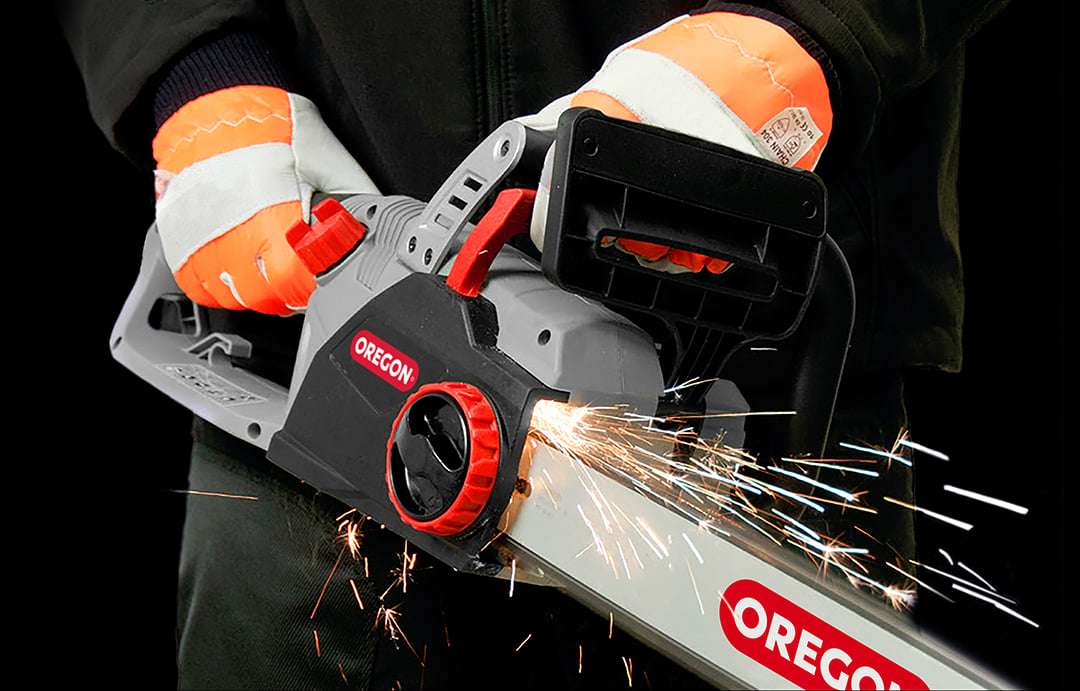 Over the course of the 60s and 70s, chainsaws became a common tool for non-professionals. But chainsaws can be dangerous in the wrong hands, and a lack of proper training and understanding of the equipment resulted in numerous injuries. This led to a push in the 80s for new safety features, with Oregon leading the charge.

If you’re a frequent chainsaw user, you’ve probably experienced something known as “kickback.” Kickback is the leading cause of severe and traumatic chainsaw-related injury. Drive links are the part of the saw chain that connects to the guide bar, and bumper drive links are designed to control the depth of the cut, thus reducing kickback. Oregon holds multiple patents for bumper drive links, providing a higher degree of safety while maintaining the same level of performance. We’ve also developed various kickback testing protocols and are active in supporting industry partners developing low-kickback options of their own. 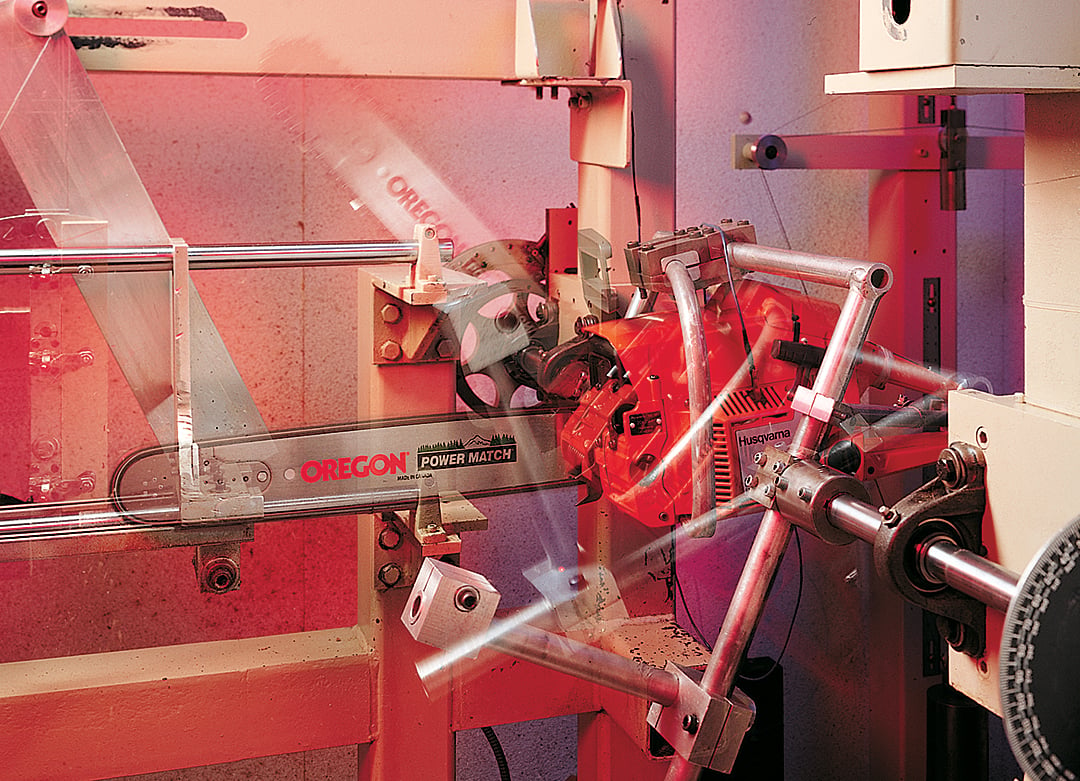 With no perceived tradeoff between safety and performance, bumper drive links are an easy choice to make. And nowadays they’re near universal—almost everyone uses the design, from logging professionals and landscapers to firefighters, park rangers, and homeowners.

MOWING JUST GOT A LITTLE EASIER

By the early 90s, Oregon wasn’t just selling saw chain and saw parts but branching out into related markets with the same pioneering spirit. With each new venture, our experts examined the field, found a common problem, and quickly provided an innovative solution. Gator® blades are one of our biggest breakthroughs, a new kind of lawn mower blade that would streamline the work of landscapers, groundskeepers, and homeowners across the land.

In ideal conditions, mowing a lawn is a breeze. The sun on your face, the smell of freshly cut grass, crossing the fairway in a series of perfectly straight lines, each one adding to your sense of accomplishment. And occasionally you have to stop and empty the bag. But sometimes, in harsher conditions, it’s not all that easy. You meet a patch of sandy soil. The grass is thick, it hasn’t been mowed in years. You’re not on a golf course, you’re on a hillside next to a freeway and the brush is up to your knees. The best you can do is hope you don’t tip over and go tumbling down the slope.

Gator® blades are designed for the worst of conditions, cutting through tougher grasses and standing up to abrasive soils that would erode a standard mower blade in less than a week.

Their teeth help with mulching, lifting grass into the air and chopping it up like confetti. It’s a three-in-one blade, designed specifically for discharge, mulching, and baggage. Their variability gives consumers the option to change strategy on the fly, providing exceptional performance, regardless of the task. You can mulch on one job and discharge on the next, never having to swap out the blade.

The original G3™ Gator® blade was patented in 1993, designed with progressive geometry on the cutting edge for a cleaner cut. The G6™ followed with a more robust blade for heavy-duty applications. With a longer lifespan due to its patented Fusion carbonite coating, it quickly became the go-to blade for professionals. A third installment, the G5™, was introduced to meet the needs of consumers between professional and residential. They might not have the most powerful mower, but they still want a perfect cut.

Returning to the world of chainsaws for our fifth and final entry, the SpeedCut™ Nano System is the latest in a long line of innovations stretching back to our company’s founding. The system is comprised of a guide bar, drive sprocket, and saw chain, providing increased speed, smooth cuts, longer runtime, and unstoppable performance.

It gives compact saws the ability to take on even the toughest of projects.

Making saw chain for smaller powerheads once meant adapting a chassis originally designed for larger models. 80TXL SpeedCut™ Nano saw chain is different, engineered exclusively for 20 to 38 cc saws. It must be used with a SpeedCut™ Nano .325" low-profile guide bar and drive sprocket. And with Oregon’s multi-axis factory grind, its razor-sharp edge provides exceptional performance right out of the box. The thinner guide bar boasts a narrow kerf, or cutting face, and a narrow kerf means less resistance to the cut. The system’s patented design allows you to run your saw longer and at faster speeds, increasing your efficiency by up to 15%. So you can spend more time working and less time refueling or recharging.

That brings us to the end of our retrospective. But if past is prologue, based on our 75-year history of innovation, we can’t wait to see what’s in store for the future. If you’re familiar with our products, you know the quality and craftsmanship that goes into everything we do. Our mission is to provide you with the tools you need to get the job done right the first time. So if something is slowing you down, let us know. We encourage you to connect with us and join our crew. Your hard work and commitment to excellence encourages us to keep on pushing.

And we thank you for the inspiration.